After a successful career at Virginia Tech, Wabissa Bebe begins a new journey in coaching at Texas A&M

Wabissa Bede wasn’t sure what his next step was going to be.

He walked off the court of Hinkle Fieldhouse in Indianapolis disappointed. His Virginia Tech Hokies had fallen short, 75-70, to the No. 7 seeded Florida Gators in the first round of the NCAA Tournament.

Virginia Tech had battled, taking the higher-seeded Gators to overtime, but they fell short of their ultimate goal to survive and advance in tournament play.

Bede, who was born in Lowell before relocating to North Andover for the beginning of his high school career, logged 29 minutes that afternoon and the loss would cap off a four-year run with the Hokies that saw him log 2,639 minutes over a 117-game career with 80 starts.

During that stretch, the guard established himself as a key part of Virginia Tech’s rotation year after year because of his defense, unselfish attitude and leadership abilities. For his career, Bede dished out 351 assists, recorded 97 steals, and frequently checked the opposing team’s top perimeter threat.

Twice he was named to the ACC Men’s Basketball All-Academic Team, he was a 2020-2021 Senior CLASS Award Candidate, and in that same year he was nominated for the ACC Honorary Postgraduate Scholarship. 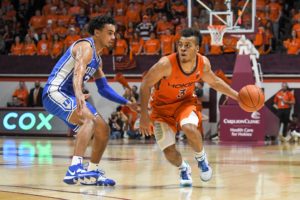 In addition to his exploits on the court, he obtained two degrees from Virginia Tech along the way. He earned an undergraduate degree in communications with a minor in sociology in just three years. Bede then added a master’s degree in agricultural and life sciences with a concentration in leadership studies in his final year.

Now, on that afternoon in March, it was the beginning of decision time.

Bede needed to figure out his next chapter and options existed. He had another year of eligibility if he wished. He was considering playing overseas as a professional, he pondered the idea of being a graduate assistant, and he also had an eye on coaching.

Bede spent a lot of time talking things over with Vin Pastore, his AAU coach with the Mass Rivals.

Pastore helped Bede get to Tech four years earlier. Bede was the floor general for the Mass Rivals U17 team on the Adidas Uprising summer circuit in 2016. The group went 21-0 over the stretch of circuit play behind the guidance of Pastore that summer and numerous members of the roster went on to the Division I level.

Virginia Tech offered Bede on his birthday and it did not take long for him to commit to the program, which he did in September after taking an official visit.

Pastore was a major influence for Bede and he saw a lot of him in his soon-to-be college coach, Buzz Williams.

Both are loud and coach hard, but they care about their players as people.

“That’s what Vin was telling me before and when I told him Virginia Tech contacted me he was very happy about that because he does like Buzz a lot,” Bede said.

Bede and Williams would be together for three years in Blacksburg, but after his junior season concluded, Williams left for Texas A&M.

Bede had to make a decision then. He entered the transfer portal and considered switching to another high-major school, following Williams south, or staying put in Virginia.

“I just narrowed it down to five schools, then three, then it just became A&M and VT,” Bede said.

Ultimately, he chose to stay where his heart was and finish his career at Virginia Tech. He couldn’t stomach the idea of leaving what had become his second home.

“It came down to my relationship with Blacksburg,” Bede said. “That was the biggest thing. I loved it a lot and I didn’t want to leave.” 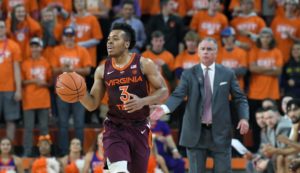 Despite that, Bede’s relationship with Williams remained strong and as decision time loomed once again after that loss earlier this year in March, a new, unexpected door opened.

Texas A&M was seeking a program aide for the men’s basketball team. Not only could Bede reunite with his old coach, he also had a logical first step towards the coaching path he could see for his own future.

“It popped up very late actually,” Bede said. “I wasn’t even thinking about working here at first. I was just talking to my AAU coach [Vin] about what he thinks I should do. There were GA spots, other schools, so I was just thinking about all that. We were talking about where is the best stability and one day this just popped up and I thought, why not?”

Stepping away from playing the game is never easy, but Bede did gain some clarity in regards to his future as a result of the pandemic.

“It kind of hit towards the time COVID happened,” Bede said. “I realized that I hadn’t gone home for a while…if I did pursue the pro route, it was going to be a lot harder to see my family even more. That made me kind of think things over, like I don’t know if I really want to do it.”

Bede could have turned pro and gone overseas to play for some good money, but he was ultimately unsure of the fit.

“It’s a grind over there for them when they’re overseas,” he said. “Doing that for long periods of time for multiple seasons is a lot. You miss a lot of things and you have to sacrifice as well.

“I’ve been away from home since I was 17 when I went to prep school. It was a grind and I realized I didn’t know if I wanted to go over there and possibly not like it and be in a different country. COVID made me realize the importance of being around family a lot more.”

Now, he’s found his perfect role as a program aide with the Aggies. As a full-time staff member, Bede has had an opportunity to learn the day-to-day operations of running a major college program as he looks to build his own resume.

“It’s been going well,” Bede said. “I’m learning every single day from other people on the staff. I’ve learned how to break down film correctly, I’ve learned about sports code and all this other stuff I didn’t really know about. Pretty much whatever the coaching staff needs, I provide for them.”

At just 23, Bede has a jumpstart on what he hopes will turn into a long and successful coaching career, even if he does look like he could still be playing himself.

“It’s weird in the staff meetings when all of the staff members look at me and think I’m in the wrong section or something and I look at them back like, ‘Nah, I’m staff,’” he said with a laugh. “They’ll say something like, ‘Oh, GAs over there,’ and I’m like, ‘Oh, I’m not a GA.’ They kind of give me looks and up and down and realize that I am pretty young to be on staff.”

“They all thought I was like 26 or 27 years old and I said, ‘Nah, I’m 23,’” Bede said. “Then, they said that the coach said I played with him and I said, ‘Yeah, I played with him two years ago and I just finished playing in March.’ A couple of them realized when I first came and said, ‘Oh yeah, wait, I remember you were on the team with him, but your hair was different.’ I just say, ‘Yeah, I know.’ Some did realize who I was beforehand, some of them didn’t.”

While his signature mohawk has been replaced with a buzz cut in his new gig, Bede still holds the same fire and passion for the game that he did back in 2016 when he originally committed to Virginia Tech.

Now, he’s ready to begin his newest and what he hopes to be a very successful chapter, as an official member of the staff in Aggieland.