More than 500 teams from all across New England and as far away as New York City participated in a pair of tournaments over Columbus Day weekend hosted by Seacoast United—the Ocean Cup and Capital Cup—bringing joy and an economic boast to the region.

The Ocean Cup was Seacoast United’s first tournament on Cape Cod. As businesses on the Cape have struggled to recover from the pandemic, an influx of activity was a welcome respite. The weather held up and the action on the fields didn’t disappoint, either.

“Not only was this a great weekend for soccer, but there were also dozens of restaurants, hotels and other attractions that benefitted from the influx of people that participated,” said Seacoast United Sales and Marketing Director James Peterson. “It’s pretty cool to see a youth soccer club put something on to this scale, and we look forward to it becoming a staple in the soccer calendar.” 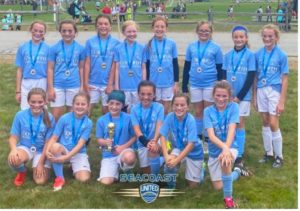 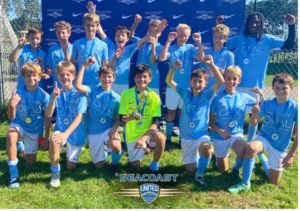 Some 250 elite teams from around the Northeast were present, making for a competitive tournament. Regular pool play lasted through Saturday and Sunday, with Monday reserved for the championship games. The Seacoast 2008 MA Elite Boys & 2011 Express girls (pictured above) won their divisions. The 2008 boys faced the competitive Park Slope United in the final.

The Capital Cup took place in New Hampshire (Bedford and Epping), home to Seacoast’s main practice and game facilities. Only an hour from the White Mountains, visiting teams were given a taste of the unrivaled foliage that envelopes the state in October.

Overall, the tournaments combined for 535 teams and more than 16,000 fans. More than 600 hotel rooms booked were through EventConnect alone, and nearly two dozen partner restaurants benefitted from the influx of teams. All told, Seacoast United produced the largest single club activity in the northeast over the weekend.

Scott Robertson, a seasoned SUSC MA North coach, traveled between both tournaments coaching his younger teams. “It was a beautiful weekend with great competition for every age group,” he said. “It was especially great to see family’s coming together and kids playing soccer with a smile.”